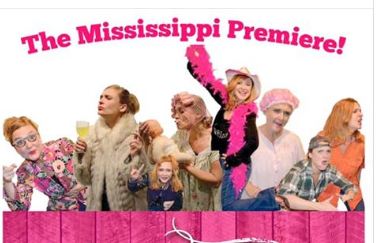 Southern Fried Chickie is coming to the Claude Gentry Theatre! This one woman play started in 2001, and is written and performed by Saltillo native Christy McBrayer.

It’s a memory piece play where McBrayer transforms from one hilarious character to the next while revisiting her hometown. This play has travelled beyond Mississippi, being performed coast to coast from California to Virginia.

It will showcase Christy’s humorous retelling of small town southern life, as well as delight audiences with well known rock, country, and blues classics such as “Take It Easy” by the Eagles and “Family Tradition” by Hank Williams Jr.

In Mcbrayer’s first showing in the Magnolia state, the show hopes to bring characters that will feel familiar to the local audience to life. This comedic performance is a tour de force by the Saltillo native, a whirling dervish of energy that goes from her grandmothers living room to a well known local honky tonk bar.

Music is being performed by Victor McIntire, a violinist from Alcorn County, Zayne Vance and Jon Myers, both on guitar and from Tippah County. It is being directed by experienced local theatre veteran Amy Bain.

The show begins Thursday, January 17th and runs through Saturday the 19th.

For more information and to purchase tickets, click the link below!